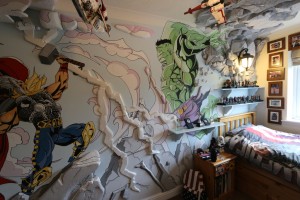 Fantasy murals take a lot of time and panning to get right, it isn’t just draw and paint there are many aspect, however when it comes to fantasy murals Sean James has a keen eye and fantasy murals are his favorite Sean James lives and breaths Marvel, so when he brings a character to life it isn’t just work for him its pleasures. And if you’re a Marvel fan great! Get the coffee on and Sean will sit down and design every thing from the planning to the drawing to the paints, and you can have an input from start to finish on any fantasy murals.

Sean James fantasy murals even stared on channel4 TV show, showing off his works as one of the best in the country, after appearing on TV Sean James work load and clients went through the roof as Britain’s top fantasy murals artist . The whole country could see just how talented and how his fantasy murals looked, and more importantly how life like they were. The fantasy murals Sean James has drawn have been for a Varity of clients from normal working class to high court judges, because for fantasy murals art there is only one place or shall I say one person to call and that is Sean James.

Sean James love for fantasy wall murals came from decorating his own sons bedroom first it was Ben 10 then progressed as he got older to Marvel, he wanted Thor on the wall which Sean gladly drew for him then he decided he wanted Hulk to be fighting Thor this was gladly done. Thor was stood upon a hand carved 3D rock, and Hulk hand a hand carved boulder that was being thrown at Thor and Thor’s Muscles and Hulks muscles were hand carved bring the characters out of the wall and if you thought that the fantasy murals couldn’t get any better Sean James threw some sound effects in.

Sean James made a 3D Thor’s hammer, which had 3D lightening which was carved out off the wall and then on the end of the hammer was a button which you couldn’t see with the naked eye, once pushed this was rigged up to a sound system in the ceiling and lighting box and lighting which was canceled in hand made cloud’s and thunder rang throughout the room. Followed by Odin talking on a pre recorded sound system the whole thing made the whole room impressive which is why it stared on Channel4 there is no other artist that goes as far as Sean James in this filed of fantasy wall murals. 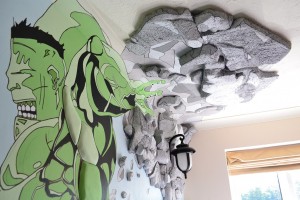 This entry was posted in Murals and tagged fantasy murals. Bookmark the permalink.